Oscar will be three next week. He showed absolutely no signs of being ready to potty train. In fact, he was afraid to sit on the toilet.
I just kept telling myself that boys take longer to train and they usually train late.
A couple of weeks ago, on a whim, I told Oscar that in the morning his diapers would be too small and so we would have to pack them up and give them to Baby Finn. He was actually excited about the idea and told his sisters at supper that we were going to pack up his diapers.
The next morning, I got a bag and started loading them up. He ran over and hugged his diapers, not wanting to let them go.
Well, we packed them all up and I prepared for the worst. I got a stack of underwear and pants, hauled all of his toys into the kitchen, filled a jar with jelly beans and waited. I didn't let him leave the kitchen. We got comfy and just laid around playing Legos. 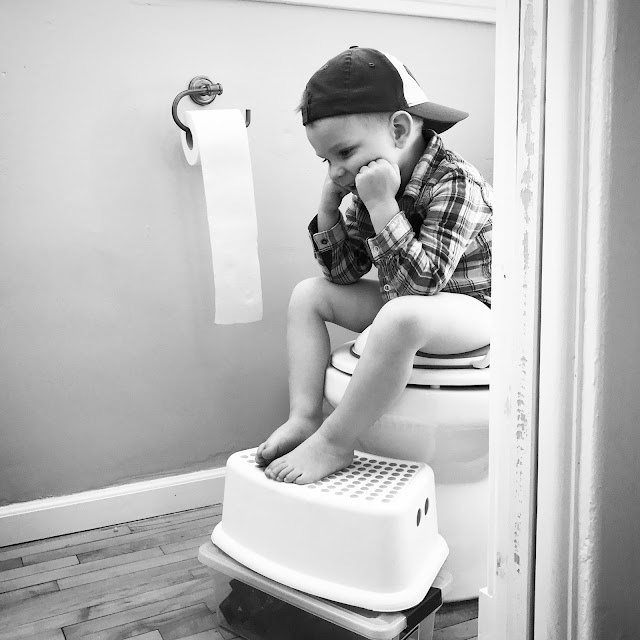 The first time he went in the toilet was earth shattering. I was so happy!!!!
We haven't looked back.
He's had maybe 3 accidents and he wakes up every morning with a dry Pull-up. I'm not quite ready to trust him in undies all night but he's doing so well!!
I'm actually shocked by the fact that he potty trained almost instantly.
I feel like it was our last big hurdle to escape life with babies. :)
Yay.
Posted by Unknown at 7:07 PM No comments:

Last winter, we were sick all. winter. long. It seemed to never end. Ava had started Kindergarten and brought home every bug possible.

This year has been much better. (I hope I'm not jinxing all of us right now). While it's impossible to avoid all sickness, there have been a few things that we've done this winter that I think have made all the difference.

-Everyone has their own cup in the bathroom and each one holds their own toothbrush and toothpaste. No more sharing.

-Bedtimes are s.t.r.i.c.t. Call me crazy but the kids go to bed at 6:30 almost every night of the week (during the school year) so they get a full 12 hours of sleep. Believe me, they need it. :)

- Humidifiers are filled and running 24/7. Every bedroom has one and there's one in the living room too. We just learned the other day that the reason people get sick more often in the winter is because the air is dry so their mucus is more dry and unable to catch viruses before they get into your body. So, humidifiers it is.
Posted by Unknown at 6:50 PM No comments: