Jaina Mae was due on May 23rd, 2012. Mom flew in to Houston...the day came and went. We spent the weekend shopping..cooking...baking...waiting...walking...resting...waiting...
May 28th was Memorial Day. This was her second (ultrasound) due date. We spent the day at Ken and Kathy's....the day came and went.
On Tuesday, May 29th, I had a Dr. appointment. There was no news. No progress. Still 1 cm and 60% effaced. When I told the Dr. that I didn't an IV or pain meds with my first child, he asked me if I went to some hicktown hospital in Oregon. When I told him I labored the whole time on an exercise ball, he looked at me like I was crazy. I think he was surprised when he found out that a doctor actually delivered Ava! The Dr. said that he wanted to schedule induction for the next Wednesday! So, the goal was to have the baby before then!
I woke up on Thursday, May 31st with different contractions than I had been having for the past 2 weeks. These were painful but not regular. By the afternoon, they were more intense but still not regular! Mom thought that I was in labor but I had my doubts...Then, around 9 pm, the contractions were coming at 6 minutes apart. I packed my bag. :) 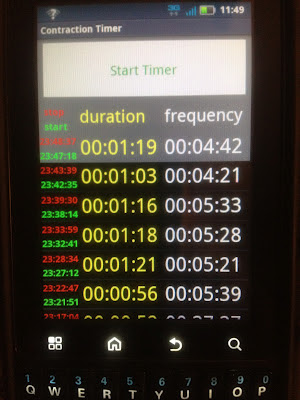 We left at midnight and the contractions were 4 minutes apart.
June 1st, 12:30 am: Checked in to triage to see if I was really in labor.
1 am: 4 cm
2 am: 4 cm + and more effaced. Checked in to the hospital.
For the next hour or so (it felt like eternity to me) the nurses worked on getting the monitor machine working. They brought in a new one and fussed around with both of them until I thought I would scream! Get out of my room and leave me alone!!! Then they had to put in a port for the IV just in case I needed to be hooked up and it took three different nurses and three needle pokes to get the job done! Seriously! This made Donald a little queasy...especially when I threatened to get an epidural...his face went green and I made him leave the room. They brought me a flat exercise ball...and then another flat exercise ball...and then finally they had someone pump one up and life was good.
Finally the room was quiet. Finally.
Time passed quickly...the contractions more manageable. I remember them being a lot worse with Ava.
6 am (and a whole cup of ice chips later): Dr. Roberts came in and checked me for the first time. 8 cm and 90% effaced!
7 am: Things started moving...they got everything ready...Dr. broke my water and told me to start pushing through the contractions. Yeah right dude!
I don't know how long or how many contractions we actually pushed for....it felt like too many. She just wouldn't come out!
7:27 am: Finally, for what seemed like another eternity, lots of help from the Dr. and squeezing Donald's fingers till he thought they would break, Jaina Mae was born. Nine days overdue.

Dr. Roberts said that he had heard something pop when she was born and thought that maybe it was her clavicle. Xrays later that day showed that she had fractured her right clavicle...it should heal on it's own within 6 weeks.
Jaina's glucose levels were low so they tested her levels after each of the first three feedings. They like to see it around 40 and hers was 30...after the first feeding it went up to 59 and was fine from then on.
Mom and Ava came to visit around 10 am and Ava finally got to meet her baby sister. 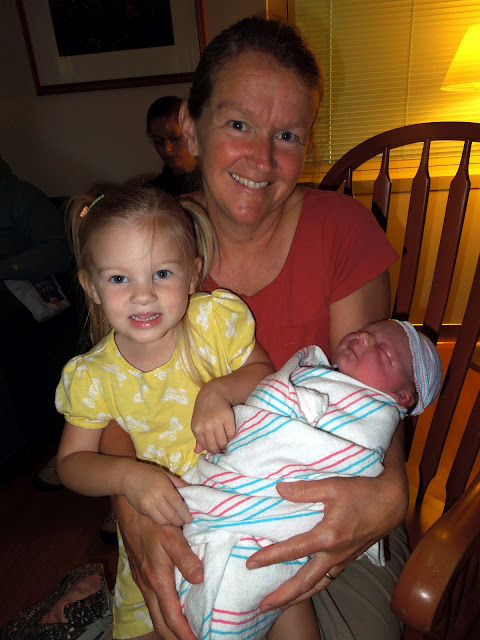 Mom spent the day with me while Donald went home with Ava to get some rest. Donald spent the night with me at the hospital and Jaina actually slept really well!
By the next morning I was ready to get out of there...we checked out that afternoon! It was so good to be home!
That first night was a rough one so we all stayed home on Sunday.
On Monday, we made a trip to Target and stopped at the waterpark...not exactly the best idea when it's 97 degrees outside!
On Tuesday, Jaina had an appointment so Donald and I took her...her weight dropped to 9 lbs 10 oz but she's healthy. No jaundice! Yay!
Tuesday night was a nightmare! Ava was up every hour until about midnight and then she started screaming and wouldn't stop. I don't know what time it was but I finally woke Mom up to help. (We have all decided that she has the worst scream we have ever heard! Donald thinks she sounds like a pterodactyl! I agree. Hopefully she grows out of it.) We figured her screaming had something to do with not having gone to the bathroom since Saturday...I sent Donald to Walmart at 1 am for suppositories...they didn't have any. I couldn't handle the screaming. I called the emergency room...they couldn't tell me anything over the phone. I called the pediatrician...he gave me some tips...we had already tried them. Finally around 2:30 am, she was so exhausted that she fell asleep. I managed to get her fed at about 3 am and she slept until 9 am! I was so thankful that Mom was there to help...I don't think that I could have managed without her.
Wednesday night was amazing. She went to bed at 10 pm and I woke up at 3 am, worried that she was ok because she was still sleeping. I tried to wake her and she ate for a bit but fell asleep and wouldn't eat any more. At 5 am, I got up and asked Mom (who was waiting for Donald to take her to the airport) if I should wake Jaina up and feed her since she had been sleeping so long. I woke her, fed her and she slept till 7:30! Needless to say she's been hungry all day!
Mom left this morning...It was hard to see her go. It was amazing to have her here for 2 weeks...she made life easy.
So that brings us to right now.....life is good.
Posted by Unknown at 5:31 PM